Difficulty
Medium
Difference in level
+400 | - 440
Distance
23,5 km
Go back
Add to my travel
An old railway line reconverted into a bike lane, for a quite hard path from Spoleto to Sant’Anatolia di Narco, going through the hills, gorges, tunnels, bridges and viaducts.

In 1926 was opened the railway line which used to connect the town of Spoleto to Norcia and at that time it constituted a small jewel of railway engineering: along the route, a little more than 50 kilometers, were built 19 tunnels, 24 bridges and some viaducts of great architectural value, with stretches of helical line and up to 4,5% pending.

This railway line was closed during 1968 and, after years of inactivity, on July 2014 on the old railway track was opened a cycle and pedestrian path, practicable until Piedipaterno.
This route is characterized by narrow gorges, high mountain landscapes with light gradient, until reaching the maximum altitude where is located the Caprareccia tunnel.

At the moment, for safety reasons, a stretch of the route Spoleto – Piedipaterno is closed and for this reason it is spread as follows:
- First part, 6,5 km on the old railway line track from Spoleto to Caprareccia
- Second part, a bypass of 12,3 km along the National Road among Caprareccia and Pietipaterno
- From Piedipaterno, instead of going to Norcia, we propose you to follow a third part of 4,7 km to Spoleto on the old railway line track, until the old station of Sant’Anatolia di Narco – Scheggino; from here there is a connection to another Regional bike lane, the Bike Lane of the Nera, which allows you to reach the Marmore Waterfalls from Sant’Anatolia di Narco.

Arrived at the beginning of the bike lane, this itinerary does continue along the old railway line track, with a steady climb up to 4,5% gradient and without any crossroad. It goes beyond tunnels and viaducts, with breathtaking landscapes on the Spoleto Umbrian Valley; it runs along abandoned tollgates and it reaches a big widening which follows the very impressive work of engineering of the Caprareccia Bridge.

Here, unfortunately, you will have to leave the old track which would lead you to Sant’Anatolia di Narco (because of 2016 earthquake). The bypass, however, is highly scenic and it brings you to Forca di Cerro (733m above sea level) from which you can admire the Valnerina mountains.
From here it is going to start the downhill of the itinerary, touching the little church of Madonna delle Scentelle, Grotti, until the Piedipaterno valley.

You can find on Busitalia website all urban and suburban buses schedule of Spoleto and Umbria. 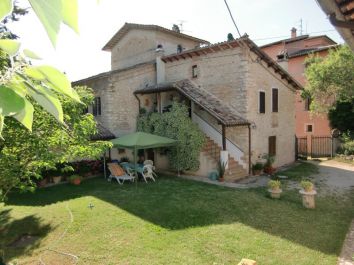