Built in the surroundings of Magione, the Castello di Zocco overlooks Lake Trasimeno. Over the centuries, it represented the most powerful military settlements in the area, having seven towers, of which five remain today, three gates and imposing fortified walls.


It was built in 1274, next to a Franciscan convent and was probably given the name Zocco because of its shape, which is very similar to a zoccolo di cavallo- a horse's hoof. 
In 1403 the first modifications were made to it, indeed, before this date, the castle was called "villa" and had one hundred and fifty inhabitants. Once the defences had been strengthened, it took the title of "castrum" and as early as 1456, housed hundreds of people from Perugia who had fled a serious plague epidemic that raged through the city.
In 1479, it endured a violent siege by Florentine troops, as many fortresses in the area did, including the nearby Rocca Monaldi.
A few years later, in 1486, a well costing twenty-five florins was built inside the castle that had been built for defensive purposes.
From the 16th century onwards a period of slow decline for the castle began, when it was improperly run by the camerlenghi (chamberlains) of the lake. Another contributing factor was the rising lake waters, which meant that Zocco found itself, in just a few years, on the shores of the lake. Once the castle was connected to a little port, an active community of fishermen quickly formed which, over time, however, gradually decreased.
At the beginning of the Twentieth century it was inhabited by a small community of farmers, but for decades, it has belonged to the Palombaro family of Rome, who are producers of a well-known extra-virgin olive oil.
Its church of San Macario, on whose walls you could once read an ancient Latin inscription next to a painting depicting a gentlewoman, is particularly noteworthy.
Explore the surroundings
Main attractions in the vicinity 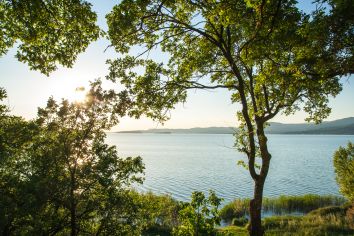 Nature parks and theme parks
A day among the islands of Lake Trasimeno
Use the boat as means of transport and let you drive to discover the wonderful islands of the Trasimeno Lake.